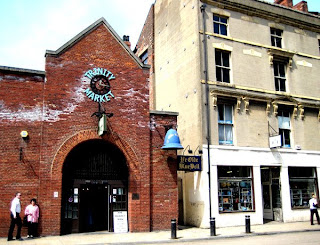 I came across this photo of the entrance to Ye Olde Blue Bell Inn and tried to clean-up the cassette tape of our gig there on 17.5.88 as best I could. The sound was very thin with lots of audience noise but I beefed it up a bit and thought it was worth sharing cos it's quite atmospheric and the only representation of us live in 1988. The other live tape from a month or so later only has one channel and is unusable, it was recorded upstairs at The Haworth Arms, a bigger room and audience. I got pissed-off by the level of noise and said "If you've just come to talk you might as well go back downstairs", we lost half the audience there and then. The Blue Bell was a great venue, an upstairs room which we arranged to use once a month with the idea of building up a regular audience and trying out different stuff. The day after the gig , the cleaners found evidence of much use of 'wacky-baccy' in ashtrays etc and that was the end of that. We had a couple of friends on the door collecting money, one of whom, Howard, spent most of the evening throwing his knife into the wooden floor; we didn't need to charge much money but half the audience got in for nothing anyway. The line-up was Paul Moller - Guitar, Vocals, Trevor Simpson - Guitar, Mr. Rudeforth - Tapes, Radio, and Gary Burroughs - Bass Drum, Snare Drum with brushes.
The tracks are:-